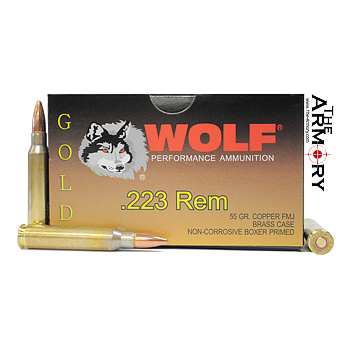 121 reviews
Read all reviews
G22355FMJCS
This item is currently out of stock. If you would like us to email you when it is back in stock, send along your email address...

Wolf GOLD 223 Rem Ammo (Compatible with 5.56x45 Chambers) - 55gr FMJ. New manufacture 223 ammo that is loaded to SAAMI specs allowing it to be fired in either 223 or 5.56. It is Boxer primed with a reloadable brass case, non-corrosive, sealed primer. Wolf 223 ammo has a copper jacketed bullet and well constructed brass case that provides tight grouping accuracy at a reasonable price. No steel anywhere making this 223 ammo indoor rifle range compliant.

This Product DOES NOT include an Ammo Can
This product is 50 20 round boxes in a cardboard box with Wolf markings.

Wolf Performance Ammuntion offers an outstanding product line of quality reliable ammo that will excel in feeding in your firearm whether it's a Colt AR-15 or an IWI Tavor, rest assured that this Wolf Gold 223 Ammo will meet or exceed your expectation for your ammo needs.

All Wolf Gold 223 ammo is loaded with a brand new brass case with boxer primers. This Wolf Gold 223 ammo is non-corrosive and contains absolutely no steel in the case or bullet making it indoor range safe and approved - it does not attract to a magnet. This particular Wolf Gold 223 ammo uses a full metal jacket made of copper that is enclosing a full lead core bullet. The precisely made bullet and uniformly applied copper jacket will ensure proper feeding in your semi-automatic rifle.

For the reloaders - rest assured that Wolf Gold 223 Ammo uses high quality brass with boxer primers which gives you the confidence in reloading your 223 ammo. A handful of us at The Armory are reloaders and we've found Wolf Gold Brass a pleasure to reload.

About this caliber: Designed by Remington in 1964, the 223 Remington is one of the most common rifle calibers used by Americans today. Available in bullet weights ranging from 38gr all the way up to 90gr and heavier - the 223 Remington offers a massive range of applications due to its various difference weights and powder loads. This gives 223 Ammo a place for hunters, target shooters, law enforcement, and even military. 223 is the most popular caliber for the AR-15 platform of rifles and continues to dominate the market as the caliber of choice for it. The 5.56 NATO cartridge that our military uses along with several NATO countries, was derived from the 223 Remington.

WOLF is the only ammunition company that provides a 100% Performance Guarantee. If you are not fully satisfied, WOLF will refund your money on the unused portion of the ammunition, including and freight charges. Visit http://www.wolfammo.com/ for details and contact.


All FIREARMS (Rifles, Handguns, Shotguns and Receivers) will be shipped only to a licensed Federal Firearms Dealer upon receipt of an original signed copy of the license.
223 Remington (5.56x45mm) 55gr FMJ Wolf Gold Ammo Case (1000 rds)121
Average rating:

Best I have found 05/06/2016
By Todd Haner
This is the most consistently accurate 55 grain commercially loaded ammo I have tested to date in my rifles. It is also the least expensive I have been able to consistently find for new manufactured ammo with no steel and brass case. Clean shooting, zero cycling issues and good brass for reloading or selling to offset costs make this stuff an excellent value. I was saving the brass to reload, but now I am just shooting it and selling the extra brass to offset costs. I can't justify reloading for what little accuracy gain and cost savings I would get for a basic 55 gr. practice and plinking load.
223 Remington (5.56x45mm) 55gr FMJ Wolf Gold Ammo Case (1000 rds)

Thumbs up. 06/13/2016
By Tyler Rogers
Checkout was a little confusing at first, but I figured it out. Shipping was quick. While not my primary supplier, I will use again if the price is right.
As for the ammo:
Wolf gold is the secret us preppers don't want you to know about. Affordable and preforms well. Depending on who you talk to, it's re-branded M193. whether this be true or false, for the price I paid through The-Armory you can't beat for brass cased .223. Flawless through my guns.
223 Remington (5.56x45mm) 55gr FMJ Wolf Gold Ammo Case (1000 rds)

Very Pleased 09/23/2015
By Mark Usseglio
Great price.
Bought 3000 (3 cases) rounds so far. Shot 800 rounds so far and each one functioned perfectly. Pretty damn good accuracy also. I like these better than PMC.
Armory shipped it out in two days and gives you the choice of UPS or FEDX.
I shopped many sites and I will stay with the Armory for my ammo.
Only one request, remove all the out of stock items from the website.It clutters up the site.
223 Remington (5.56x45mm) 55gr FMJ Wolf Gold Ammo Case (1000 rds)

Amended Review! 07/06/2018
By Loren Wolfe
My earlier review below would have been 5 stars however, I only rated it 4/5 stars due to the ammo being shipped in the factory box.

Today I was contacted by the seller advising me that in fact plain packaging was an option which I apparently missed at check out.

Therefore, I have happily amended my review accordingly!