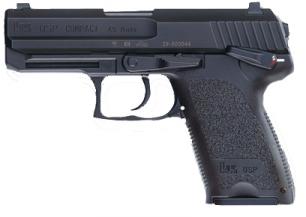 2 reviews
Read all reviews
4101409
This item is currently out of stock. If you would like us to email you when it is back in stock, send along your email address...

All HK USP models are available with the proprietary "Hostile Environment" dark blued finish to protect major metal components of the USP against corrosion, including exposure to salt water. All H&K USP pistols are covered by a lifetime warranty for the original retail purchaser. New In the Box (NIB), H&K Pistol Case, 2/8 Rnd Mags

The HK USP Compact is a small frame pistol capable of firing the most powerful cartridge in .45 ACP Based on the full-size USP models, these handy pistols combine compact size with optimum effective shooting performance.

USP Compacts are smaller and lighter than large frame USPs. The reduction in trigger reach and grip circumference increases concealability and enhances shooting ergonomics. Unlike some subcompact semiautomatic pistols that use a difficult to shoot "two-finger grip" frame, the USP Compact uses a narrow, full-hand grip frame with a choice of interchangeable extended or flush-fitting magazine floorplates. This makes the pistol easy to shoot without sacrificing concealability.

Like their large frame predecessors, USP Compacts are designed with the demanding needs of the American shooter in mind. Using a modified linkless Browning-type action, the USP Compact is built to take the punishment of high energy +P loads.

To reduce the length of the slide and barrel on the USP Compact, the mechanical recoil reduction system found on large frame USPs has been replaced by a specially designed flat compression spring contained in the captive recoil spring assembly by a polymer absorber bushing. Service life is still engineered to exceed 20,000 rounds.

All FIREARMS (Rifles, Handguns, Shotguns and Receivers) will be shipped only to a licensed Federal Firearms Dealer upon receipt of an original signed copy of the license.
H&K USP | Compact | 45 ACP | Free Portable Pistol Safe2
Average rating: