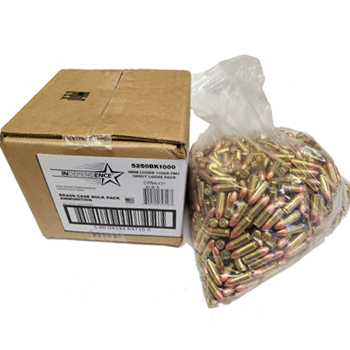 Independence ammo, part of the ATK Sporting Group's Ammunition group, provides small-caliber rounds to military, law enforcement and sport-shooting enthusiasts. Quality ammo ideal for target practice and recreational shooting. Independence loads offer consistent performance at a very competitive price. ATK also operates the Lake City Ammo Plant, which makes millions of rounds for the United States military every year. This ammunition is perfect for target practice, range shooting, and tactical training; it’s both economical and reliable. ATK's ammo is all made here in the United States, with most components made under the same factory for enhanced quality control and consistency. This ammunition is a new production, non-corrosive, reloadable ammo in boxer primed and brass cases. 9mm Luger Ammo by Independence is packaged in bulk of 100 rounds loose. Occasionally the manufacturer will use nickel-plated brass casings. These are reloadable and considered a premium case material. 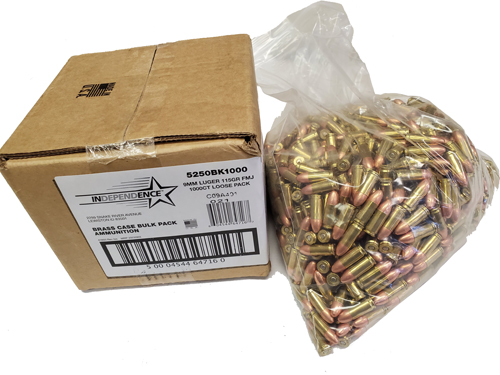 No Issues Here 04/04/2019
By Pax
I didn't realize that this was "loose" ammo, so it's 1000 rounds dumped into a box but I don't care, it all goes in the same place anyway and if it keeps the price down then I'm for it. I shot a bunch through my Freedom Ordnance FX-9 carbine and it was accurate. I had a few ejection failures but I don't blame the ammo entirely, this rifle has been picky with all sorts of brands of ammo so I won't blame the ammo. Was pretty clean shooting too.