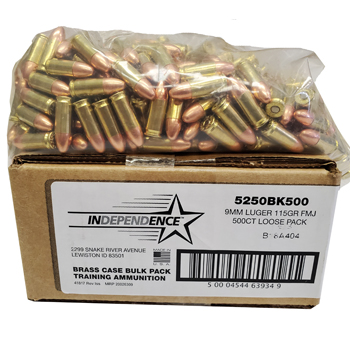 4 reviews
Read all reviews
$99.99 in stock
5250BK500
This item is currently out of stock. If you would like us to email you when it is back in stock, send along your email address...

Independence ammo, part of the ATK Sporting Group's Ammunition group, provides small-caliber rounds to military, law enforcement and sport-shooting enthusiasts. Quality ammo ideal for target practice and recreational shooting. Independence loads offer consistent performance at a very competitive price. ATK also operates the Lake City Ammo Plant, which makes millions of rounds for the United States military every year. This ammunition is perfect for target practice, range shooting, and tactical training; it’s both economical and reliable. ATK's ammo is all made here in the United States, with most components made under the same factory for enhanced quality control and consistency. This ammunition is a new production, non-corrosive, reloadable ammo in boxer primed and brass cases. 9mm Luger Ammo by Independence is packaged in bulk of 100 rounds loose. Occasionally the manufacturer will use nickel-plated brass casings. These are reloadable and considered a premium case material.

All FIREARMS (Rifles, Handguns, Shotguns and Receivers) will be shipped only to a licensed Federal Firearms Dealer upon receipt of an original signed copy of the license.
9mm Luger 115gr FMJ Federal Independence Ammo Brick (500 rds)4
Average rating:

I have and will continue to run these rounds as my "go to" for range time and drills!
9mm Luger 115gr FMJ Federal Independence Ammo Brick (500 rds)

Good ammo 11/16/2019
By David Atherton
I bought them, but all the casings said "blazer" on the the bottom, I didnt see anything about them being reloads, so maybe I got the wrong ammo? Either way they shot well.
9mm Luger 115gr FMJ Federal Independence Ammo Brick (500 rds)