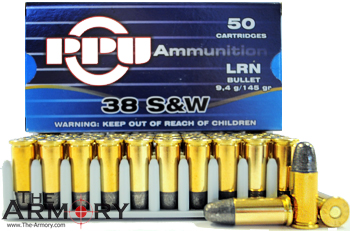 3 reviews
Read all reviews
$19.99
PP-R3.7BX
This item is currently out of stock. If you would like us to email you when it is back in stock, send along your email address...

The .38 S&W is a revolver cartridge developed by Smith & Wesson in 1877 for use in the S&W .38 Single Action revolver. Only a few companies still manufacture ammunition including Prvi Partizan. The majority of ammunition manufacturers that still produce 38 S&W typically manufacture only a 145 to 146 grain Lead Round Nose bullet.

Top Notch 12/08/2018
By Brian Delcambre
The Armory was one of only two places I could find this Ammo to try out a Smith & Wesson revolver that was built in 1889 and obviously ahead of its generation. It is a hammerless revolver with a safety built in to the grip. A modern day striker fired gun. Lol. Well the service was super fast and Well done by the Armory.
TecheMan