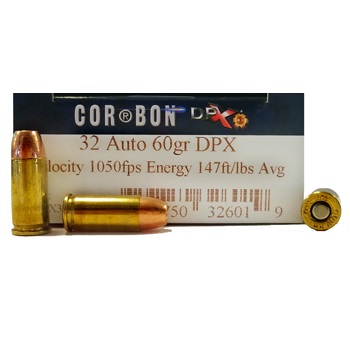 1 reviews
Read all reviews
$29.99 in stock
DPX3260/20
This item is currently out of stock. If you would like us to email you when it is back in stock, send along your email address...

CORBON’s DPX Handgun ammunition exhibits superior performance to all other defensive ammunition on the market. The reason is the homogenous solid copper projectile. “Barrier blind” is the new terminology for ammunition that outstandingly performs after penetrating a heavy barrier like auto glass or steel. DPX is the only ammunition that maintains 100% of its weight after going through such barriers.

The research and development team at CORBON used the protocol from the FBI's testing procedures to formulate the DPX defensive line of ammunition. They achieved soft tissue penetration of 12”-18”, with reliable and consistent expansion. The recovered bullets retained 100% of the original size and weight when recovered from the test medium of 10% ballistic gelatin and shot through four layers of 10oz denim barrier. The permanent crush cavity is also considerably larger than that of a typical JHP.

All FIREARMS (Rifles, Handguns, Shotguns and Receivers) will be shipped only to a licensed Federal Firearms Dealer upon receipt of an original signed copy of the license.
32 Auto (ACP) 60gr DPX Corbon Ammo Box (20rds)1
Average rating: