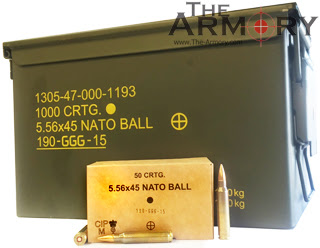 SS019CS
This item is currently out of stock. If you would like us to email you when it is back in stock, send along your email address...

NOTE: SS109 is the NATO Designation for M855 5.56 Ammo. This ammo is the same 62gr 5.56 round with a steel core penetrator WITHOUT the green tip/paint. Please be aware of this before buying this ammunition.

Genuine 5.56×45 mm NATO Ball Ammo - GGG 5.56×45mm NATO Ball Ammo is manufactured according to the requirements of STANAG 4172. This is high quality military grade ammo that you can depend on. In 2005 cartridges were successfully qualified at NATO European Regional Test Center (ERTC) in UK and GGG gained right to mark its cartridges with NATO interchangeability sign so be assured that you are getting the real deal SS109 ammo. GP21 is a marking of standard GGG 5.56×45 mm cartridges produced in accordance to the requirements for SS109.

This ammo is packaged from the factory in a genuine 50-Cal ammo can.