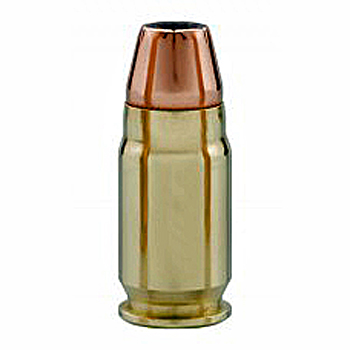 Corbon JHP is the original “HOT STUFF”! Back in 1982, Corbon's testing showed that most JHP (Jacked Hollow Point) ammunition would plug up with clothing and fail to expand in soft tissue. The typical JHP was passing through like hardball ammo causing little damage. For this reason, the original Corbon JHP was designed with higher velocity than their competitors. Independent studies have shown that the rapid energy transfer from the bullets violent and immediate expansion in ballistic gelatin has given Corbon's JHP a one-shot stopping power percentage of over 90%! The rapid expansion reduces projectile over penetration. Corbon's JHP typically achieves 9”-15” of penetration. Corbon’s line of high velocity JHP ammunition is still PROVEN to be effective and remains #1 in STOPPING POWER!

All FIREARMS (Rifles, Handguns, Shotguns and Receivers) will be shipped only to a licensed Federal Firearms Dealer upon receipt of an original signed copy of the license.
400 Corbon 165gr Self-Defense JHP Ammo Box (20 rds)2
Average rating: